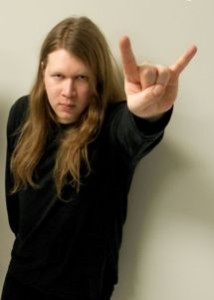 At the age of six he became fanatically obsessed with Guns ‘N Roses and that caused him to search for an instrument to play (with). In the primary school he started getting the piano lessons, but the lack of noise forced him to change it for the drums. After a while he wanted to express himself melodically as well, so he started playing an electric guitar. He literally abandoned all of his hobbys and practiced all days, learning stuff all by himself. At the age of sixteen, Nejc and some friends formed a hard rock ‘n roll band Podžlejbn, where he experienced writing his own material and live performing for the first time.

Just before his 18th birthday he became a student of Igor’s and his playing soon improved significantly.  In 2005 he joined forces with Igor, forming Black Diamond.  They’ve started writing their own material right away and that alone fulfilled Nejc’s musical appetites for some time. Due to the lack of able local metal musicians, they were alone for most of next seven years. Nevertheless they wrote more than 40 songs during that time, of which 10 were about to become their first demo and later official album.

During that time they started making music together, but they’ve also learned how to record and produce it. And of course, during that time they both started working with professional musicians, most importantly with Žanil Tataj Žak. They’ve became good friends since, and just after the release of their album Last Man Standing, Žak joined Black Diamond as a full time member. The three, accompanied by Urban Medič on bass and Klemen Markelj on drums, performed for the first time under the name of Black Diamond. So one of Nejc’s biggest dreams came true.

The release of the album was followed by lots of positive feedback from home and abroad, the future of the band is currently looking brighter and more confident, than ever before.

Nejc appears as a calm person, who’s living today and looking towards the future, often through the humorous eyes…  But the surface is often hiding what’s under…