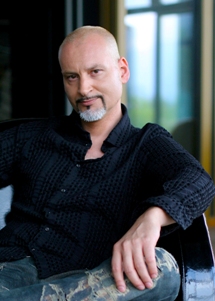 He graduated from Music high school in Rijeka, finishing the course of violin and viola. In addition to that he is also a multi instrumentalist. Žak has learned vocal technics from his mother Petja Todorova – Tataj, famous piano player and vocal educationalist.

Žak has started his rich music career in mid 80′s in famous Rijeka’s band Jersey. He recorded his first album with Jersey for yugoslavian discography label Jugoton. They had numerous concerts all around Yugoslavia and have recided many different awards from various rock festivals.

Between 1988 and 1991 he played a violin in opera orchestre of HNK Ivan Zajc.

In the begining of 90′s Jersey had stopped performing, because Žak, who was known for his great vocal abilities, was invited to perform with legendary rock band Divlje Jagode (Wild Strawberries). They recorded an album Magic Love with the intention to be published on the european market. But because of the war, Divlje Jagode had stopped performing and therefore Žak has started working with the slovenian band Mary Rose. He recorded an album with the band, but because of the fire blast in studio Tivoli, the album never saw the light of the day. Mary Rose then stopped performing for some years.

In the begining of 1994, Žak has contributed on the joint project of the famous european rock bands Helloween and Gamma Ray. He also worked with Zoran Šerbedžija, ex-guitarist of  Crvena Jabuka on the project MADCAP LAF’ in Germany.

In 1995 and 1996 he worked as an instrumentalist and vocalist on two albums of slovenian band called TURBO, called “The Power Of Metal” and “A Glimpse Of Home”.

In the second half of 1995 he founded a band in Croatia called AQUA and they had recorded an self-titledalbum.

Again he returned to Divlje Jagode with the concert Final top 1000 in Stuttgart. This concert was broadcasted by SDR 3, MTV and other european TV and radio stations. He successfully performed with Divlje Jagode until 1999 all over Europe and recorded an album Sto Vjekova.

In 1999 he recorded his first solo album and performed on some festivals with a fiew songs.

At the end of 1999 he published his symphonic album with the title Chistmas Songs.

At the begining of 2000 he started performing with two slovenian bands, Črna Gradnja and Ambasada.

Due to the need for making original authors music, he again founded Mary Rose with the guitarist Eki Alilovski in 2004 and the result of this work is a new Mary Rose album, titled Feniks, released in 2006.

In 2006, he also founded a jazzy band Norne with famous Rijeka’s vocalist,where Žak is playing a bass guitar.This band performs various songs in various languages and is getting ready for concerts and possible album.

In 2013 he joined Black Diamond, after they released an album Last Man Standing, on which he sang.

At the moment he’s working as a vocal educationalist in music school Studio Maraton and is a member of few slovenian bands.

His rich career is nowhere close to an end and audiences are waiting for Žak’s future performances or albums.