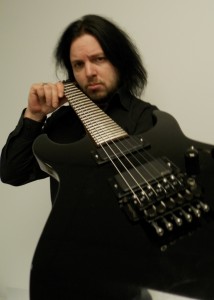 He’s still accompanied by the music on his life path.

The biggest cause for that is Metallica, untill today his biggest influence. What he sees in them is especially a role of a rightful rebel… Someone from the edge of society, who’s proving what you can acomplish in your life, if you do it with your heart and believe in yourself. Even when it’s hard.

He was inspired by the music, so at the age of fourteen he grabbed a guitar, then as a self tought. At the beginnig of high school he formed a band, with which they played covers and a few songs of their own for a few years. During this time he for the first time seriously deepened into the misterious world of composition, for which he found out he had a talent for.

Beside that, he armed himself with musical literature and all by himself he learned how to read and write the notes and basics of music theory. He fulfilled his theoretical and practical knowledge in some private music schools, at last with master of jazz guitar, Primož Grašič.

In 2003, at the age of 25, he opened his own music school in Novo mesto and taught there ever since. Two years after the opening of his school, he formed the Black Diamond with Nejc Vidmar, who used to be his most talented student. In the august of 2006 they started recording their first demo album. Some other musicians joined the band, but due to the lack of serious ambitions they left the band soon after. The two were not too moved by that, therefore they continued with the recording of the songs, so in may of 2011 they finished their first demo album. During that time (2005-2011) they also wrote around 30-40 raw versions of songs for the forthcoming albums.

On march the 7th, 2013, their first official album, called Last Man Standing saw the light of the world. It recieved many positive reviews at home as well as abroad. Žanil Tataj Žak(ex-Divlje Jagode, Mary Rose), who collaborated with Igor and Nejc already on the demos  joined the band. He was followed by Klemen Markelj (The Drinkers) on drums and Urban Medič (Prospect) on bass.

Igor is currently presenting their album live in Slovenia, but they also have a plan on going to international stages.

He is without a doubt a rebel and a fighter, who would never betray his ideals.

…and the dreams may continue!